The Bonavita 1.0L Variable Temperature Electric Kettle affords some of the greatest control over heating water, but it’s debatable whether such control is needed for brewing coffee. I’d purchase the kettle again based on my 2 years of ownership — but for tea and not coffee. 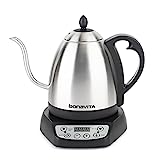 The Bonavita Variable Temperature Kettle provided some of the best temperature control when I purchased it a few years ago, and it likely still does. The extract temperature can be set anywhere between 140 to 212 ̊F (60 – 98 ̊C) — that’s a suitable range for everything except taking a bath.

While many other kettles have a few temperature settings, most don’t aren’t specific enough to choose any temperature 140 ̊F or above.

The Hamilton Beach Temperature Control Kettle is a typical example, having settings every 5 degrees between 160 ̊F and boiling. That’s better than many older models that had even fewer settings, but it’s still not degree-specific nor covers as wide a range as the Bonavita.

The Krups Smart Temp Digital Kettle takes a different approach, displaying the exact temperature as the water heats. Water will continue heating a few degrees after the temperature is turned off, though, so the level of control still doesn’t quite match the Bonavita. The Krups kettle is also less convenient because you must watch the temperature (and I always forget to).

Additionally, the Bonavita Kettle will maintain a specific temperature for up to an hour, keeping it within 2 degrees plus/minus in my experience. The temperature control was useful when I forgot about making coffee, and when I’d brew my own coffee and then a family member’s at different times as people woke up.

The other major feature of the Bonavita Kettle is its gooseneck spout. As far as goosenecks go, the shape is easy to precisely pour.

A gooseneck spout is only necessary for manual pour-overs, and that’s not my brewing method. For French press, I found the pour rate slower than I’d like. The water cooled a little too much as I filled a larger press.

Other features include those that are common to electric kettles. The Bonavita Kettle heats water quickly thanks to a powerful 1500 watts, and it rotates 360 degrees on the base. I suppose the 360 degrees is an ergonomic perk, but my hand’s certainly capable of adjusting slightly to set down a kettle that doesn’t rotate like this.

The theory that precise temperature control is needed for brewed coffee is suspect. Specific temperatures certainly have a major impact on espresso, but they effect brewing methods only moderately at best. The reality is that your grinder, water makeup (i.e. mineral content), technique and probably even room temperature are more significant variables.

Depending on your philosophy, you likely use brew water that’s either boiling or 195 – 205 ̊F. The Bonavita’s temperature control isn’t needed if you use boiling water, and it’s easy enough to get into that lower range without even a thermometer. Let a kettle cool for 30 seconds after boiling, and it’ll bee in that 195 to 205 range. (The time may differ if you’re at high elevation.)

The Bonavita’s temperature control is much more important when steeping tea — and this is why I purchased the kettle. Different teas should be steeped at different temperatures, with the temperature having a large impact on extraction.

Whereas coffee might be brewed between 195 and 205 ̊F, tea might be steeped anywhere between 140 ̊F (60 ̊C) and boiling. Moreover, the precise degree makes a much bigger difference when steeping specialty green, white and pu-erh teas (which I prefer).

If I were to purchase a kettle just for brewing coffee, the temperature control wouldn’t be a major consideration.

Gooseneck Only for Pour-Overs

As mentioned, the gooseneck is another feature that may be superfluous. The gooseneck is necessary to brew manual pour- overs, but I’m not a fan. It was a non-factor and maybe even a detractor for my French press (yes, feel free to judge my brewing preferences).

Detracting from its main features, the Bonavita Kettle has a few downsides that I’d consider if purchasing a kettle again.

Less Durable Than Other Kettles

The Bonavita Kettle has a reputation for being less durable than some other kettles, and this was true in my experience.

The durability issues aren’t with the kettle itself but rather with the temperature controls. The reviews I looked at when purchasing said the controls malfunctioned, and that’s what happened with mine. After about 2 years, the controls shorted and became unusable. They continued to work for a little while but ultimately wouldn’t turn the kettle on.

When the short developed, I tried to take the base off and check whether the issue was fixable. The base is held on with tri- head bolts, which aren’t too common. I ended up ditching the kettle rather than ordering a screwdriver for these bolts, assuming that the issue wasn’t fixable anyway.

To its credit, Bonavita offers a warranty. The short issue with mine developed after the warranty period expired, however.

My Bonavita also did come with a plastic cover for the base. The cover is intended to prevent water from getting into the controls, and it very well might have prevented my unit’s short circuit.

The plastic cover was too ugly for my kitchen, though. It might be more suitable in a commercial setting, but 1-liter kettle isn’t large enough for cafes.

Large Model Would Be Better

Size is the other issue I had with the kettle. The 1-liter size was fine for brewing my and a family member’s coffees in the morning, but it wasn’t big enough for entertaining. It also wouldn’t hold enough water for a larger family.

If I were to purchase the Bonavita again, I’d go with the bigger 1.7-liter model. I also don’t see much use for the company’s newer 0.5-liter mini kettle.

A $69.99 MSRP seems high for a 1-liter kettle, even if it does have excellent temperature control and a gooseneck. The Bonavita is regularly sold at lower prices that are more consistent with comparably capable kettles. It’s a sold choice among these kettles.

The Bonavita 1.0L Temperature Control Kettle makes sense if you need temperature control for tea or a gooseneck for pour- over. If these don’t apply, I’d probably go with a lower-priced kettle that has fewer features. I would (and did) get the kettle when that temperature control and/or gooseneck is needed, although the larger model is preferable.