Bottomless portafilters look exotic when brewing espresso, and have a cult following among baristas. There also are practical reasons to use these. If you have a home espresso machine, here’s why you might want one of these among your accessories.

What is a Bottomless Portafilter?

A bottomless (naked) portafilter is a portafilter that has no spout on its underside. Whereas traditional portafilters have either a single or double spout, the bottomless one has nothing. It doesn’t even have a bottom that funnels the brewed espresso through a hole — espresso directly exits the basket screen and goes into the cup.

Bottomless portafilters are sometimes called naked portafilters, because the basket is “naked” and can be seen.

Traditional portafilters have either a single or double spout through which brewed espresso flows. The design stems from Italian coffee culture, where single (the default) and double espresso beverages are both commonly drunk.

Many specialty coffee shops outside of Italy use double shots as their default, and therefore have only double-spouted portafilters. While a single spout theoretically can (and sometimes is) used for a double espresso, the practice is uncommon.

Advantages and Disadvantages of Bottomless Portafilters

The lack of a portafilter spout simultaneously presents advantages and disadvantages. In short, bottomless portafilters are beautiful, educational, slim and messy.

The various benefits and drawbacks fall into three categories: aesthetic, educational and practical.

At least one kind of nakedness is aesthetically desirable when pulling espresso. There simply is no matching the beautiful elegance of correctly pulled espresso as it flows out of a bottomless portafilter.

The brewed espresso flows along the screen to the basket’s center, where it then steadily flows into the cup. The patterns are mesmerizing, especially if you bend down to see the bottom of the naked screen.

Because you can watch espresso flow directly from the basket, you can monitor how it flows from the basket. Different flow patterns reveal different issues with the grind and/or tamping:

More espresso brews out of specific areas of the basket screen. This indicates that water is flowing faster through channels in the grounds, thereby creating uneven extraction and reducing extraction time.

Channeling can be caused by weak tamping or inconsistent grind size. Try using more force when tamping. If that doesn’t resolve the issue, the best remedy is to invest in a better grinder that’s able to produce more uniform grounds.

A thin “pin” of espresso shoots out of one spot. This likely occurs after trouble pulling the shot and before the speed splashes and causes a big mess. Pinning most often occurs in only one place, although it can happen in several places at once. You probably won’t see it until after there’s a mess all over the counter.

Pinning is caused by the coupling of a very small channel and a high group head pressure. It might be addressed a few different ways:

Espresso first flows in a “donut” ring around the outside of the basket, before filling in the rest of the screen as extraction continues. The donut may be whole or partial, depending on how even the tamp is.

Donut preinfusion is the result of side-channeling along the basket’s circumference. This can happen if the tamp is poor, the basket is wet when dosing, or the tamp itself is too small for the basket. Be more diligent when prepping espresso, and check the tamp/basket size if that diligence doesn’t resolve the problem.

Off-center flow is almost always caused by poor preparation. The grounds were either unevenly disbursed in the basket or unevenly tamped. You may need more practice preparing shots, which is common for new baristas.

Rarely, off-center flow could be caused by an uneven espresso machine. The flow would always be off-center, but consistently in the same general spot.

The practical implications of naked portafilters are some of the most factors for home baristas, and they include both good and bad aspects.

Non-believers treat these tales of mythical shots as just that — myths. They say that there’s fundamentally no difference in the quality of espresso that’s brewed through bottomless and traditional portafilters.

Despite what non-believers claim, there might actually be some science that supports the cult following of bottomless portafilters.

Some espresso adheres to the side of a traditional portafilter’s spout, and this results in a little loss of crema. The espresso that flows off of a bottomless portafilter goes directly into the cup, thus causing no loss of crema. Crema does impact the flavor of a shot — so a shot with more cream may indeed taste better in some cases.

Overdosing is the practice of using more espresso than is typical when pulling a shot, in order to change the shot’s flavor profile, strength, volume or other characteristics. This is common practice with some home machines that have small portafilter sizes, and is occasionally done for other reasons.

Because a bottomless portafilter doesn’t have a spout, it has a smaller profile and leaves more clearance below it for cups. Clearance is a particular issue with many home espresso machines, as they tend to be smaller.

You can always pull shots into a demitasse cup, and then from the demitasse into a mug. This disturbs the crema and results in slight volume loss, however. Pulling directly into a mug that you’ll make a cappuccino, cortado or americano in may be preferable, and a naked portafilter might provide the clearance your mug needs.

The lack of a bottom and spout means that bottomless portafilters have nothing to contain the mess when a shot goes awry. Whether caused by pinning, a portafilter that’s loaded askew or just randomness (which does happen), a major problem will be a major mess. Be prepared to have grounds, water and espresso all over your kitchen, your clothes and possibly even your face.

Messes from missed shots are uncommon, but bound to happen occasionally. If you have fine art near your espresso machine or pull shots in the morning after dressing for work, this alone might be reason enough to stick with traditional portafilters — they have a bottom and spout to contain most messes. 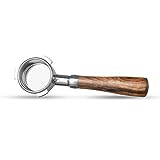 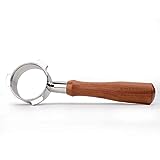 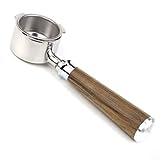 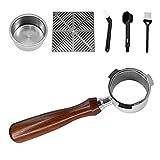 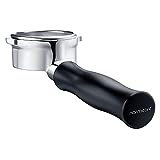 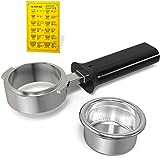 Is a bottomless portafilter pressurized?

No, bottomless portafilters are not pressurized.

What is the point of a bottomless portafilter?

Bottomless portafilters help you troubleshoot your espresso shots and have a beautiful aesthetic.