Cascara sits at the intersection of coffee and tea, coming from the coffee plant but brewing (and looking) much more like tea. The beverage has been enjoyed for centuries in coffee-growing regions and is now becoming more common in coffee-drinking countries.

What is the History of Cascara?

Cascara has been brewed in Ethiopia and Yemen — the birthplaces of coffee — for centuries and likely as long as coffee has been cultivated there. The fruit is historically spiced with cinnamon, nutmeg and ginger to create a traditional beverage known as “hashara” in Ethiopia and “qisher” in Yemen. Qisher continues to be even more popular than coffee in Yemen, largely because it’s a less expensive drink there.

Coffee growers in Latin and South America are primarily responsible for bringing cascara to the specialty coffee industry’s attention. El Salvador and Bolivia growers in particular have exported the fruit, and the term “cascara” comes from them.

Is Cascara the Same as Coffee?

The coffee beans that we enjoy so much are actually the pits of coffee cherries, which are fruits that grow on coffee trees (more like bushes). The fruit is normally depulped to separate fruit from pit, and the pits then are further processed and roasted to become recognizable beans.

Cascara is the fruit that remains, specifically the fruit’s skin after all pulp has been washed away and the skin dried. 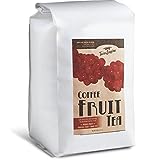 How is Cascara Used?

Being leftover waste from coffee processing, cascara is simply discarded by many growers. Some use it as compost or fertilizer for their coffee and other plants.

How to Brew Cascara

Because cascara is new to the specialty coffee scene, there isn’t yet a standard way to brew it. In general, brew cascara like you would a fruit tea.

For iced cascara steep ~6 tablespoons per 10 ounces of water, and let the brew steep for 24 hours. Strain and dilute to your desired strength. Then, pour over ice and enjoy.

If you don’t have an easy way to strain cascara after brewing, a French press works well.

How to consume Cascara

After brewing, cascara can be drunk on it own as a hot or iced tea. Some people like to add honey or sugar, even though the tea is already somewhat sweet. You can also spice it to create the traditional hashara and qisher drinks.

Cascara can’t officially be called tea, for it comes from the Coffea genus rather than the Camellia sinensis tea plant. This is similar to how herbal and fruit teas also aren’t officially tea (you’ll often notice them marketed as “fusions” and “tisanes”). It’s the fruity tisanes that cascara is most like.

The coffee fruit is a lot like the fruits used to brew herbal teas, except cascara is slightly larger and more leathery than most tea fruits. It could also be compared to a raisin as well.

(Note: The cascara the comes from coffee plants also shouldn’t be confused with cascara sagrada. Cascara sagrada is bark from the California buckthorn tree. It’s used as a traditional herbal medicine and in dietary supplements, and it has laxative effects.)

Cascara tastes nothing like traditional coffee, but much more like a fruit tea. It’s fruity and sweet, with notes of hibiscus, cherry, mango, red current and rose hips. Sometimes there’s also a slight tobacco undertone that stems from the fruit’s leathery nature.

When brewed as hashara or qisher, the beverage also takes on traits of a mulled wine.

Does Cascara Have Caffeine?

Caffeine is a naturally occurring pesticide, and coffee trees certainly have it in their fruit’s skin to deter insects and other creatures that would otherwise destroy the fruit. There’s not as much caffeine in cascara as there is in brewed coffee, however.

Researchers with Square Mile Coffee Roasters found (unsurprisingly) that cascara’s caffeine content varied depending on how strongly it was brewed. Even at the highest strengths, though, its caffeine content registered 114 mg/L. That’s well below brewed coffee’s 400-800 mg/L, and it’s more in line with the caffeine content of black tea.

Drinking cascara is an experience that every coffee drinker should try at least once, for it provides an insight into the coffee plant and processing that’s not familiar to many. You may even end up liking the beverage if you’re a fan of fruit teas, and it’s a great one to brew when you want something refreshing with just a little pick-me-up. Try your first cup of cascara, and see what you think.