Blooming your coffee allows carbon dioxide to be released from the beans which will give you a better flavor and better extraction. It’s a step that should not be skipped in your brewing process!

Brewing freshly roasted coffee grounds creates a frothy head much like a beer’s. Whereas the head is desirable in beer and enhances flavor, the head that develops during coffee brewing interferes with extraction and negatively affects flavor.

To best brew fresh coffee, the head should first be dissipated via blooming. 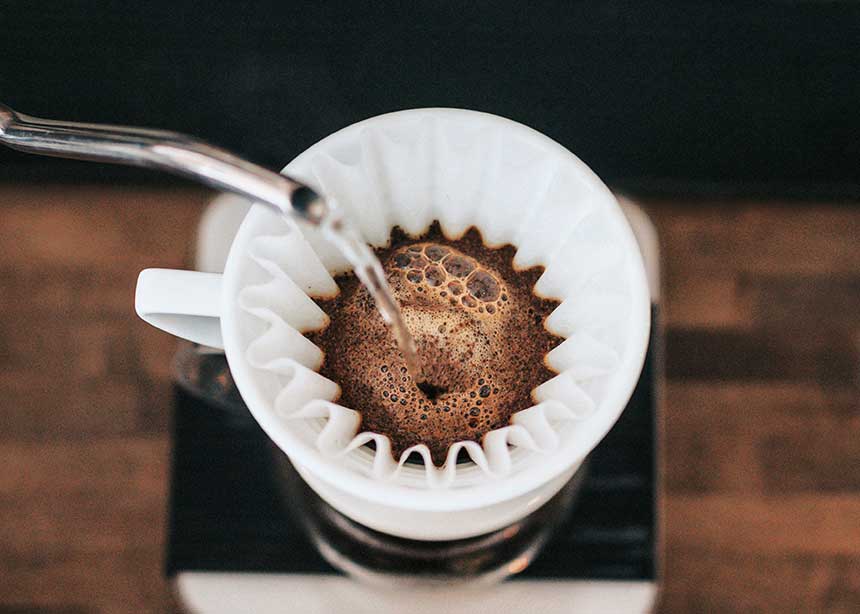 What is Degassing in the Context of Coffee?

Degassing is the process of carbon dioxide emitting from freshly roasted coffee beans.

Gases build up in coffee beans during the roasting process, the main gas being carbon dioxide.

Some of the built-up gases exit beans during the first crack and second crack, which are two notable points of the roasting process. The beans pop, much like popcorn, becoming larger and somewhat puffy. An exiting of gas and heat are the primary causes of the pop, or crack.

Not all of the built-up gases exit beans during roasting, however, and a fair amount of carbon dioxide remains in freshly roasted beans. The beans then “degas” as carbon dioxide exits the beans over the coming days, weeks and (to a lesser extent) months.

All freshly roasted beans emit carbon dioxide and degas, which is why freshly roasted coffee is sold in bags with one-way valves or folded-down paper bags that aren’t airtight. Stale coffee grounds that were roasted months ago have little or no carbon dioxide left, and thus can be packaged in airtight containers.

What is Blooming When Brewing Coffee?

Blooming is a pre-brewing process that accelerates the degassing of freshly roasted coffee grounds.

The grounds are dampened after grinding and before brewing. The little water causes carbon dioxide to exit from the grounds, which can be seen as the grounds froth and bubble.

If freshly roasted coffee isn’t bloomed, then some of the carbon dioxide will be trapped in the water. The gas interferes with proper brewing in two ways.

Not extracting other compounds created a duller brew, lacking some of the beans’ aromas and flavors. This is particularly notable, because those aromas and flavors are one of the main reasons to purchase freshly roasted coffee beans.

Second, carbon dioxide itself imparts a sour flavor into brewed coffee. The sour flavor doesn’t taste good, and it’s especially noticeable because other flavors aren’t present as they should be.

Carbon dioxide exits freshly roasted beans as they rest after roasting, but other compounds also escape from the beans. Simply letting coffee sit so that you don’t have to bloom will result in finer aromas and flavors also being lost.

When Should You Bloom Coffee?

Coffee normally tastes best a few days to a few weeks after roasting. Blooming won’t degas coffee enough in the first couple of days after roasting, but it’ll be effective after a few days. The amount of carbon dioxide left after a few weeks is significantly less, so there’s less need to bloom. You won’t hurt coffee that’s a few months old by blooming, however.

How To Bloom Your Coffee

To bloom coffee, simply dampen the grounds for about a half-minute before brewing. For general guidelines consider the following factors.

Hot water should be used (even if cold-brewing), because it most quickly extracts carbon dioxide molecules. The water is considered part of your total brewing water, and the blooming water isn’t dumped before continuing on with the brewing process.

Enough water should be used to dampen all of the coffee grounds. The water shouldn’t be enough to actually create any brewed coffee, though. For a more exact measurement, use about 2 grams of water for every 1 gram of grounds. This should equate to around 12.5% of your total water for most brew methods.

Blooming for 30 to 40 seconds is good for most freshly roasted coffee. Shorter than this, and carbon dioxide won’t be fully extracted. Longer, and other compounds may be extracted unevenly. You can simply watch for bubbling to subside.

Coffee that’s been roasted more recently should be bloomed for closer to 40 seconds, and coffee that was roasted months ago can be bloomed for closer to 30 (or sometimes 20) seconds. Lighter roasts will require slightly more blooming than darker roasts, because less carbon dioxide escapes if the second crack isn’t reached. Darker roasts also have larger beans, which provide more surface area for minorly faster extraction.

The way water is poured for blooming is unimportant, so long as all grounds are evenly dampened.
When continuing with the brew process, pour the next water in a way you break the “crust” that develops. Some carbon dioxide will be trapped under this crust, but breaking the crust will release that trapped CO2. Breaking the crust can be done with a methodical slow pour (e.g. with pour-over) or a large fast pour (e.g. with French press).

How to bloom coffee for specific brewing methods

For blooming that’s more specific to your brew method, the following are best practices for blooming with different brewing techniques.

How to bloom pour-over coffee

Dampen the grounds with a standard concentric pour, working from the center outward toward the filter (but not actually touching the filter). Break the crust with another methodical pour, following your preferred technique for the first pour.

How to bloom coffee for French Press

Dampen the grounds without giving them a swimming pool or bath of water. Break the crust by quickly pouring the remainder of your water.

How to bloom cold brew coffee

Cold brew fails to extract the finer notes of coffee. It’s a great brewing technique for old coffee that doesn’t have fine notes, or for bad coffee that has unwanted aromas. It’s less desirable for freshly roasted coffee, because some of the finer notes that are still present in the beans will be lost. Additionally, cold brewing fresh light roast coffees can result in sour coffee even if you bloom fairly well.

How to bloom automatic drip coffee

Newer mid-range and high-end automatic drip brewers often have a built-in bloom setting. Make sure the setting is on.

If using an older or more affordable drip brewer, turn the brewer off just after it begins spurting water. Quickly turn the brewer back on before 30 seconds, as it’ll take another short while for water to work through the brewer’s apparatus again.

Older and budget drip brewers are the least convenient brew method to bloom coffee with. They also don’t provide the best extraction or flavor profile. Therefore, another brew method is preferable for freshly roasted coffee.

How to bloom coffee for Aeropress

Invert the plunger so that it’s as low as possible in the Aeropress, and dampen the grounds. Continue swirling for about 15 seconds. Brew as normal.

The bloom time for Aeropress is shorter because the grounds are finer, which creates substantially more surface area for extraction.

How to bloom Espresso

Blooming is accomplished during preinfusion, which should be done before pulling any shot of espresso. Preinfusion simultaneously blooms and reduces channeling.

Coffee can indeed be overbloomed. Almost all carbon dioxide is extracted within 30 to 40 seconds, so there’s no need to bloom longer than this with most brew methods.

What Does It Mean If the Coffee Doesn’t Bloom?

If coffee doesn’t bloom and create a “head,” then almost all of the carbon dioxide has already degased from the beans. The coffee is older, and many of the other fine notes will have also been lost due to the roasted beans’ age. Coffee that doesn’t bloom at all is likely months (or years) old.

If you are interested in the scientific side of coffee, you may also enjoy learning about coffee TDS, total dissolved solubles, which measures strength and extraction.

Scott M. Brodie has over 20 years of professional experience working in coffee shops and writing about coffee (including selling superautomatic machines). When not writing, he can usually be found roasting a new African single origin or composing a fictional work.