Few coffee brewing methods are as established as the French press is. Although a basic brewing method, the press offers a combination of simplicity and quality that have made it a favorite of many for more than 90 years. Whether you’re new to the brewing method or are looking to further hone a long-practiced skill, here’s what to know about a French press and how to brew excellent coffee with one.

How Does the French Press Work?

The French press is an immersion brewing system, which means that the grounds are immersed in hot water throughout the brew. This type of brewing generally creates a fuller flavor and body profile than drip methods (e.g. drip coffee, manual pour- over).

The Basic Components of a French Press

The essential components of a press are the beaker, the filter and the plunger. The filter consists of a metal screen, a perforated metal disk that holds the screen in place, and a coil that presses the screen against the beaker. The plunger is a metal rod that attaches to the filter at the bottom end, and has a knob (basic or decorative) at the top end.

When brewing with a French press, the coffee grounds and hot water are poured into the beaker. The filter/plunger is placed on top of the grounds and water. Once the brew cycle is complete, the plunger is pressed downward so that the filter is forced down. This filters the grounds to the bottom of the beaker, and on top is brewed coffee that’s ready to pour. Most beakers sit in a base that has a handle for pouring.

There are a couple of other components, the lid and the base, but these do little more than retain heat, provide stability and add aesthetics.

How to Brew Coffee With the French Press

How to Brew French Press – the James Hoffmann Method

James Hoffmann is an established coffee guru and leader within the industry. In addition to the standard way of brewing a French press, he’s also had success with a slightly alternate method:

How to Make Cold Brew With the French Press

The French press is ideal for making small batches of cold brew, and it’s easier to clean than many cold brew kits. To make cold brew with a French press:

The Best Coffees for a French Press

The French press is highly versatile, and everything from a bright African light roast to a Sumatran dark roast will taste good when brewed this way. A couple of details should be kept in mind when brewing any coffee this way, though.

First, the water temperature profile is ideally suited to bring out the most nuanced flavors in specialty coffees. The water’s initial boiling temperature will extract the acids and other compounds that create a bright or complex cup. The quick cooling of the water prevents over-extraction of bitter compounds, which would cover the more delicate desirable notes.

Second, the mesh screen isn’t as effective as a paper filter. Although most coffee grounds are pushed to the bottom, extremely small grounds — called fines — will escape around the edges of the screen and end up in the final brew.

Fines can generate subtle over-extraction as they sit in a cup of coffee, but this aspect can be addressed or taken advantage of. When brewing a bright and clean coffee, drink the coffee right away before the fines can generate any noticeable over- extraction. If brewing a coffee that’s supposed to be strong and bold, the further extraction of the fines will only enhance these characteristics.

Thus, no one coffee is best suited for the French press. Any decent coffee will taste good in it, but there are a couple of nuances that will help yield the best results possible with any given coffee.

How to Choose a French Press

Because the French press is such a basic brewing method, few features actually change the profile of brewed coffee. The ones that do are whether the top has a lip that extends into the beaker and whether the beaker is double-walled. Both features are desirable from an extraction standpoint, because they reduce heat loss while the coffee is steeping.

French press selection is also highly aesthetic, though, because there aren’t a lot of features to look for. Find a press that’s the right size for you and that you like the look of. Only go for the insulated model if you still really like the looks of it — there’s more difference in how models look than in how they perform. 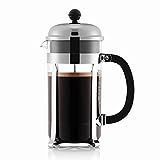 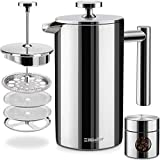 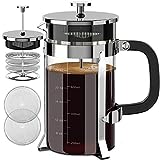 How long do you grind coffee beans for the French press?

A burr coffee grinder will create the most consistent grind and is preferable to a blade grinder. If using a burr grinder, the coarseness of a grind is determined by selecting a setting on the machine.
If using a blade grinder, the amount of time that beans grind depends on the particular model grinder. The grinder’s size, blade shape and power are only some of the factors that affect how long beans should be ground for.
To begin with, try grinding beans in a blade grinder for 15 seconds less than you would if using a drip brewer. See what the results are, and make adjustments as necessary.

How long to let coffee steep in a French press?

French press coffee should be allowed to steep for between 4 and 5 minutes. The shorter timeframe will result in less extraction, which will create brewed coffee that’s brighter but has less body. The longer timeframe creates more body but less brightness. Anywhere in between makes a compromise between the two.

How many scoops of coffee should be used for French press?

Coffee is always most accurately measured with a scale rather than a scoop, but scoops are convenient. Expect to use about 1 coffee scoop for each cup that a French press has, keeping in mind that most presses use 4- or 6-ounce cups.

What is a Cafetiere?

Cafetiere is simply a European name for the French press. The name is sometimes lengthened to cafetiere a piston, or caffeteria a stantuffo, but these are all different languages’ names for the same brewing method.
The French press is also known as plunger coffee in Australia and New Zealand. Coffee press is another common name used in some places around the world.

Where is the French Press From?

Despite the press’s clearly French nomenclature, the brewing method’s origins are a bit murky. Both the Italians and the French claim to have invented the press.

The Italian Claim to the French Press

The Italians claim to the press’s invention is a legal one. The first pattens for a press-like brewing device were filed in the 1920s, and they were filed by Italians. Based on this, the Italians were the first ones to officially “invent” the press.

The French Claim to the French Press

According to coffee lore, however, the French had created a press-like brewing method long before the Italians filled out their paperwork. The French story begins with an everyday blue-collar worker in the 1850s.

The common brewing method of the day was to put grounds in a mug and pour hot water over them. The grounds would settle to the bottom, so the coffee could be drunk without getting too many grounds in your teeth.

One day, this working-class Frenchman was running late and forgot to put his grounds in first. He instead poured hot water first and added grounds second, which caused the grounds to float on top of the water. On his way to work, the Frenchman bought a cheap metal screen and grabbed a stick — using the screen and stick to push down the grounds, he created the first primitive French press.

The only catch to the French story is the person who sold that metal screen — he was an Italian merchant.

The Possible French and Italian Claim to the French Press

If the French story is to be believed (and it’s as credible as most claims in coffee history), perhaps both the French and the Italians have some role in creating the French press. In either case, the brewing method is clearly associated with the French today but enjoyed around the world.

The French press has been and continues to be one of the most popular ways to make coffee. Even in the day of pour-overs and high-tech gadgets, this brewing method deserves consideration. Make a French press, and taste how good it can be.

Before you go…
Would you like coffee from around the world delivered every month?

Get 50% off your first bag of Atlas Coffee Club

Enter the code: COFFEE50 at checkout!