Specialty coffee culture has spread throughout much of the world, extending from Italy to much of Europe, North America and Australia. One country that has a historic and prominent place within coffee, yet frequently gets overlooked, is Japan.

The History of Coffee in Japan

The first shipments of coffee arrived in Japan during the 1600s, coming aboard Dutch ships that ferried goods for Dutch residents. Consumption soon expanded beyond just the Dutch, and both Dutch and Portuguese merchants were trading coffee with Japanese residents by the century’s end.

The country’s first coffeehouse was established in 1888, when Ekei Tei opened Kahiichakan after seeing similar establishments during travels abroad. Tei’s coffeehouse wasn’t nearly as successful as those overseas, though. Coffeehouses had been places of political revolt in Mecca and France, and they’d given rise to stock exchanges in London and New York. In contrast Tei was only able to keep Kahiichakan open five years before the business was forced to close.

It wasn’t until the 1900s that coffee culture gained a critical mass within Japan. Widespread emigration to Brazil during the early 1900s led many Japanese to begin working in South America’s coffee industry. Corresponding interest in coffee spread throughout much of Japanese culture (in both Brazil and Japan).

The modern prominence of Japan’s coffee culture owes much to Tadao Ueshima, who is the “father of coffee in Japan.” Ueshima’s own story reflects how much of a setback the Japanese coffee industry experienced during World War II, however.

Tadeo Ueshima founded Ueshima Tadao Shoten in 1933, with the intention of making the company a foremost figure in Japan’s growing coffee industry. A World War II embargo on coffee imports (because they were luxury goods) stalled Ueshima’s aims for the company, though. The embargo wasn’t lifted until 1950, and it wasn’t until 1969 that Ueshima Tadao Shoten really began producing canned coffee beans en masse.

The latest phase in Japan’s coffee history can be marked by the founding of the All Japanese Coffee Association in 1980 (which Tado Ueshima was instrumental in starting).

Today, coffee is prominent throughout much of Japan. It spans the spectrum from the ultra-convenience of vending machines to the artisanal craft of third wave coffee.

Coffeehouses can be found throughout cities, and many people enjoy the beverage daily. In particular, the specialty coffee culture has blossomed in Japan since the 1980s (as it has in many other countries as well).

The kissaten is a particular type of coffee shop, considered to be “old school” now. Originating in the Showa era (1926 – 1989), they differed from typical cafes by remaining focused on coffee, not alcohol, and serving small meals. There have been few new kissaten opened, so those that exist are usually run by older generations, possibly family establishments.

More significant than chronology is Japan’s geographic location and connection with tea. Because Japan is so removed from other coffee-drinking countries, innovations have come out of Japan that are very different from what’s found anywhere else. The country’s storied high tea history contributes to a consistent emphasis on aesthetics as well as taste.

The combination of innovation, quality and aesthetics is most evident in Japanese iced coffee and Japanese pour-over coffee. An eco-friendly paper filter, World Barista Champion and World Brewer’s Cup Champion show that the country’s acclaim is hardly limited to only two brewing styles, though.

Japan has repeatedly demonstrated a knack for combining the art and science of coffee in ways that few other countries are able to conceive of. The following are merely some of the most well-known innovations to come out of the country.

Hot brewing methods are able to bring out beans’ most nuanced aromas and flavors, for some more delicate compounds are only extracted at higher temperatures. Any hot-brewing method will yield a more complex cup than cold-brewing the same beans will.

Coffee loses its more delicate flavors as it cools, however, and sometimes off-flavors can be imparted as well. No once-hot cup of coffee will taste as vibrant if it’s had several hours to cool.

Given these principles, making iced coffee presents an obvious paradox. How does one get the maximum flavor in cold coffee? The Japanese have answered that question — by flash-chilling to capture flavors.

Japanese iced coffee is drip-brewed at double strength, and the brewing coffee drips directly onto ice. This allows the method to capture those finer notes that only hot brewing will, yet also quickly cool the coffee so those finer flavors aren’t lost with time. The result is a bright, flavorful and cold cup, unlike anything that cold-brew can match in vibrancy.

Kyoto-style cold brew emerged from Kyoto, Japan, as one of the most beautiful and most flavorful ways to make cold-brew coffee.

The Kyoto-style brew method uses room-temperature water, but the water is brewed drop-by-drop as it flows down through a tower. Brewing by one drip at a time allows for much more control over each brewing variable (i.e. ratio, time, etc.).

Like all cold brews, Kyoto style is smooth because it’s brewed at cooler temperatures. Being able to “dial-in” the coffee drip- by-drip gives much greater control over the final coffee’s flavor, however. This brew method won’t match the vibrancy of Japanese iced coffee, but it can bring out traits that will be muddled and lost with most standard cold-brew methods.

Additionally, the tall towers used to make coffee this way are some of the most aesthetically captivating coffee apparatuses. The size and elegance of these brewers make them a statement piece in cafes.

Japan didn’t invent the pour-over, but they’ve pretty near perfected this brewing method, as has been demonstrated by the country’s performance in the annual World Brewer’s Cup Championship.

The Japanese-made Hario V60 is the only pour-over coffee maker to win the World Brewer’s Cup multiple times — and it’s won 6 times thus far. Tetsu Kasuya isn’t the only person to win the competition using a Hario V60, but he’s the one who redefined how to brew with the coffee maker.

While there isn’t one definitive Japanese way to make pour-over coffee, Tetsu Kasuya’s 4:6 method with the Hario V60 is the most well-known and innovative technique. To brew this way, divide the brew water according to a 40:60 ratio:

The latter 60 percent of water should be divided into between 1 and 3+ pours. How many pours are made will determine how strong the coffee is. Most people prefer 2 or 3 pours, but more or less can be done.

No other pour-over method so well defines how variances in ratios and time impact the profile of the brewed coffee.

The Japanese have invented the ultimate in convenience for pour over lovers. The single serve disposable pour over features the correct amount of coffee for a single serve, encased in a filter bag with a cardboard holder that sits on top of your mug. They probably shouldn’t replace your everyday coffee, but could be good for traveling/camping. 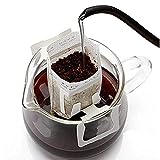 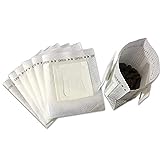 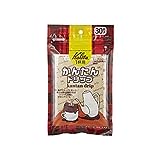 The concept of drinking already brewed coffee from a can (or bottle) originated in Japan. Tadao Ueshima’s company is credited with releasing the first canned coffee in 1969, and the Japanese company Pokka Coffee installed the first hot and cold vending machines — which served canned coffee — in 1973. (A competitor of Tadao’s unsuccessfully debuted a canned coffee in 1965.)

Can designs have changed dramatically since 1969, and most people think of this product line as bottled or RTD (ready to drink). That first canned coffee is still the original version of already brewed coffee that can be bought at the store or vending machine, however.

Instant coffee is best understood as a global phenomenon. Multiple countries have issued patents for various instant coffees, and coffee is widely enjoyed this way across much of the world.

One of AGF’s first major projects was to introduce Japan to instant coffee, which was successfully done throughout the early 1970s. The use of instant coffee quickly grew in Japan, just as the consumption of canned coffee during this time.

The previous embargo on coffee may have contributed to these products’ quick successes, as Japanese families weren’t accustomed to brewing coffee in the same way that Americans and Europeans did during the mid-1900s. Since people weren’t accustomed to making coffee, already-made solutions were especially easy to market.

What is Japanese Coffee Jelly?

Aptly named, coffee jelly is a jelly dessert flavored with coffee and sugar. The dessert appears in early-1800s cookbooks from England and is most likely British, but it’s much more popular in Japan than anywhere else now.

Coffee jelly made inroads in Japan during the early-1900s, when young professionals were showing interest in Western culture. While the dessert is rarely found in England, Canada or the United States today, it’s a mainstay in Japanese convenience and grocery stores. It’s still so popular that Starbucks put a Coffee Jelly Frappuccino on its Japanese menus in 2016.

Outside of Japan, coffee Jelly can be readily found at Asian food markets. It comes in prepared cups, similar to how pudding and non-coffee Jello is sometimes sold.

What Do the Japanese Put in Their Coffee?

Japanese coffee is commonly served with the offer of milk and sugar, but the milk used often isn’t fresh milk. Instead of fresh milk like is served in much of North America and Europe, the Japanese more frequently use “coffee fresh.”

Coffee fresh is a type of artificial cream that’s pervasive throughout the country. It has a mild taste that complements many coffees well, but the taste is different from fresh cow milk.

When serving iced coffee, the Japanese often add gomme syrup rather than sugar. Dissolving isn’t an issue when mixing sweetened syrup into iced coffee, and gomme syrup happens to be more popular than simple syrup in most of Japan. The flavor of gomme is neutral, although it has a barely noticeable smoothening of a beverage’s texture.

Gomme used to be used in many classic cocktails, but it’s given way to simple syrup because the latter is easier to make.

Japan is home to many well-known and well-respected coffee brands. A few favorites include:

Coffee is worldwide, and some of the best aspects of it came from Japan. Embrace Japanese coffee in any of its forms, and enjoy the diversity that is global coffee culture.

Before you go…
Would you like coffee from around the world delivered every month?

Get 50% off your first bag of Atlas Coffee Club

Enter the code: COFFEE50 at checkout!