The Moka Pot is a stovetop coffee maker that brews espresso-like coffee, but is less expensive and easier to use than a full-fledged espresso machine. You may also have heard it referred to as a Bialetti – the name of its inventor and the most famous brand of moka pots.

While common throughout Southern Europe, Latin America and Australia, the coffee maker isn’t as widely used in the United States.

If you’re less familiar with the Moka Pot, here’s a guide to what it is, what it brews and how to use one.

How Does a Stovetop Espresso Maker Work?

The Moka Pot has three chambers:

As the water is heated in the lower chamber, pressure builds up until steam is forced through the coffee grounds. The coffee brews as steam comes up through the grounds, rising through the spout and dripping into the upper chamber.

How to Brew Coffee in a Stovetop Espresso Maker

Brewing coffee in a Moka Pot is simple, especially when compared to making espresso:

Because the Moka Pot must be removed from its heat source when brewing is complete, this isn’t a coffee maker that you can leave unattended until you’re ready for a cup. But, you don’t need to be hands-on during the brewing process.

What Grind Should Be Used for a Moka Pot?

The ideal grind for a Moka Pot is fine-medium. The grind is just slightly coarser than espresso but still much finer than pout- overs. One step coarser than an espresso grind often works well.

Can I Use Regular Coffee in a Moka Pot?

Any coffee can be used in a Moka Pot, so long as the grind is fine-medium. Medium-dark and dark coffees are best suited for the coffee maker, as the lack of precision (see below) makes it difficult to draw out the finer notes of light and medium-light roasts.

Espresso roast is a dark roast and therefore, brews well in a Moka Pot. It’s not the only dark roast you can use, though. Regular coffee is fine to use. 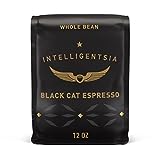 Italian Alfonso Bialetti invented the Moka Pot in 1933, and his company Bialetti Industries continues to be the primary manufacturer (although not the only one). The coffee maker quickly became common in Italy, and it spread throughout Southern Europe after the end of World War II. 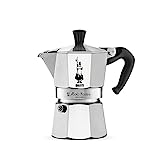 Specifically, the Moka Pot became the standard way for the Italians and the Spanish to make coffee at home. As these cultures spread throughout the world, so too did the coffee maker.

The Spanish brought the Moka Pot to Latin America, where it has been a staple for decades. The coffee maker continues to be used in many homes throughout the region, and it’s especially popular in Cuba — where the Cafe Cubano was created.

Italians were slower to bring the coffee maker with them as they moved out of Italy, but immigrants to Australia eventually brought it there. Both Italians and non-Italians use the Moka Pot today, often combining the brewed coffee with hot water or warm milk.

The name Moka Pot was inspired by the Yemeni city of Mocha, which has had a lasting influence on coffee culture. (Yemeni coffee continues to be some of the best in the world, although geopolitical issues make it difficult to source.)

Less Common in the United States

The Moka Pot is much less common in the United States, and there may be a couple of reasons why.

Historically, the Moka Pot was invented after the main Italian immigration to the United States. The Italians who immigrated before the World Wars couldn’t bring the coffee maker with them since it wasn’t invented yet.

Additionally, the Moka Pot makes an espresso-like brew that’s different from what most Americans drink. Most people in the United States prefer brewed coffee, whether from a French press, pour-over or automatic drip.

What is a Cafe Cubano?

Because Moka Pot coffee can be strong and bitter, many people add sugar to the brew. A cafe Cubano adds sugar during the brewing process.

To brew a cafe Cubano, put sugar into the upper chamber before brewing. The brewed coffee will drip down into the sugar, dissolving it and creating a frothy-like coffee. The texture isn’t like frothed milk, but it’s also quite different from standard brewed coffee or espresso.

Milk can be added to a cafe Cubano after brewing if desired, preferably using warmed milk. Don’t place milk in the upper chamber when brewing because it can easily scald.

As stated, the Moka Pot makes an espresso-like coffee that’s different from brewed coffee. The coffee is drunk in small quantities of 30 – 60 milliliters (1 – 2 ounces), and it’s quite strong. Some people also find the coffee bitter and add sugar to it. Milk can also be added, of course.

Is Moka Pot Coffee the Same as Espresso?

Both are some of the few methods that use pressure to force water through coffee grounds, but that’s about where the similarities end. Espresso machines afford much more control over the brewing process than the Moka Pot does:

Is Moka Pot Coffee as Strong as Espresso?

The Moka Pot and the French press make very different coffee, and which is better depends on personal preference. The press allows for more control over brewing, which ultimately makes it easier to bring out nuanced flavors in specialty coffees. Coffee from a press will never be as strong or espresso-like as what a Moka Pot brews, though.

Siphon coffee makers work the opposite way that Moka Pots do. Rather than pushing pressurized steam up through grounds, siphon makers pull water up through by creating a vacuum.

The siphon brewing technique creates some of the cleanest coffee out of any brewing method. Most siphon coffee makers also are designed to be highly precise, which further allows for greater control than Moka Pots do.

For these reasons, siphon coffee makers generally make higher-quality coffee than Moka Pots do. Which is better depends on personal preference, however, because the brews are very different. Siphon coffee is more like brewed coffee in how strong it is.

Moka Pot coffee makers are fairly basic in both design and construction. There aren’t many differences in the design of the three chambers, and most models are constructed of aluminum and a bakelite handle. However, there still are a few details to consider when choosing a Moka Pot.

What Size Moka Pot Do You Need?

Since the middle chamber of a Moka Pot must be entirely filled with grounds, there’s not an easy way to make partial brews with this coffee maker. Therefore, you’ll want a size that is close to how much coffee you normally drink at once.

It’s also best to not get a model that’s much larger than you need. The additional grounds that larger models use increase extraction slightly, as it takes the steam longer to go through the grounds. This makes the final brew slightly stronger and a little more bitter. 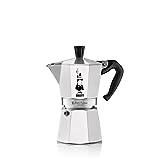 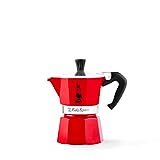 Most Moka Pot models make 1 – 18 servings, with a serving being ~50 milliliters (~2 ounces). A model that brews one or two servings is good for people who live alone or couples, while a large 18-serving model is well-suited for entertaining. Larger households probably want a model that’s somewhere in the middle of the range.

Even though the larger models might increase bitterness slightly, this trade-off is preferable to making multiple brews when serving larger groups. The bitterness can be offset with sugar — you can even make cafe Cubanos and possible introduce people to a new, fun coffee drink.

Should You Get an Electric or Stovetop Moka Pot?

Moka Pots still come in both electric and stovetop models, but the vast majority are stovetop today. This type of coffee maker is rarely used where there isn’t a stove, not to mention that an outlet likely isn’t nearby if there’s no stove. Most people have and prefer a stovetop model.

Can you use a moka pot on an electric stove?

Yes, you can use a moka pot on an electric stove although it’s not ideal. Most electric stoves give you less fine-grained control over the heat than gas stoves.  This means there is a higher risk of over-heating and therefore over-extracting the coffee which will make it taste bitter.

That said, if all you have is an electric stove, you can make it work with a little practice.

Note that if you are using an induction stove top, an aluminum moka pot won’t work as-is. In this case you should use a heat diffuser. Bialetti even makes one for this purpose.

If your moka pot is aluminum as most are, it will heat up and cool down quickly. Be careful not too use too high of a temperature setting for that reason.

I have had good results by pre-boiling the water and pouring that into the moka pot, rather than using room temperature water and heating it up in the moka pot. This shortens the amount of time that it’s on the stove, reducing the possibility of overheating the coffee and therefore over extraction.

However, if you become well practiced with your electric stove and find the right temperatures, you can actually do the whole thing on the stove with great results,although it might take slightly longer.

You have to find the sweet spot to create enough heat, but without going too far. Usually this is a medium heat on the electric stove.

While it may present a couple of extra challenges and require a little practice to dial it in, you can definitely make a moka pot work on an electric stove.

There are good reasons why the Moka Pot is so popular throughout much of the world. If you like strong coffee and appreciate an easy way to make it, try using a stovetop espresso maker for your next brew.